Before last year, the holiday highlight reel was a series of canned memory clips…

In fact, I feel a warmth when I conjure up the images in my mind.

There is something reassuring about the universal experiences that we all share.

They allow us to relate to one another, to find common ground versus contested ground and to feel a part of something that is larger than ourselves (to be super cliché).

It’s pretty amazing and truly puts many day to day issues into perspective.

They do not guide, teach or inspire.  And the stories do not get retold.  Everyone already has their own version.

And that’s OK– we need these memories.  They are a source of comfort, of nostalgia, of connection to the human experience.

During that summer, I communicated back and forth with family back home in MA.

My grandfather was sick and they weren’t exactly sure what was going on.  I received updates after every doctor’s visit as the weeks passed.

He was 85 and had some health issues already.  Were they just flaring up?

As we got into the fall, the ‘C’ word started getting tossed around– but nothing had been validated.

My aunt, his daughter, told me that he was getting weak and had no appetite.

I didn’t want to over-hype things in my mind, but they certainly felt ominous.

On November 16th, one week before Thanksgiving, I booked a plane home for the holiday.  My gut told me to do it.

I flew in the evening before Thanksgiving.  My parents picked me up at the airport and we drove to my aunt’s house to receive some news.

Earlier that day, my grandfather saw his doctor.  He had undergone some tests and the results were in.

He was diagnosed with late stage terminal liver cancer.  It was inoperable.

Radiation and chemotherapy may buy him some time, the doctor said.  He had a few months to live, at most.

He needed to make a decision to fight or ride it out– and he needed to decide soon.

As we sat and processed the news, I was deeply saddened, but not surprised.

No one thought he had the flu.  We all knew that cancer was possible, even likely, based on his symptoms and medical history.

In that moment, it occurred to me that I was exactly where I was supposed to be, that I did good listening to my gut.

A few houses up the street, my grandfather was contemplating his life.  Tomorrow, I hoped I could brighten it just a little.

That evening, after my parents left, my aunt and I went to dinner and then prepared for tomorrow’s holiday meal.

Around noon the next day, we packed up the food and made the long 90 second drive to my grandparent’s house.

I ducked down as we approached and my aunt drove around the back so I wouldn’t be seen.

My cousin was there for a quick visit and he came out to help us unload the car.

With my cousin following her, my aunt walked in saying that she brought a helper.

Without missing a beat, I said, “actually, she brought two!”

Coming in through the porch, I saw my grandfather sitting in his rocker in the living room.  I was awash with so many thoughts and feelings all at once.

The first thing I noticed was him being happily surprised as he affectionately exclaimed his classic greeting “ma fille!” (my girl in French.)

When I ran over to give him a hug, his gaunt appearance struck me and I quickly remembered what was happening.

I tried to ignore how I felt in that moment.  I resolved to make this a normal Thanksgiving, damnit.

Why bother focusing on what couldn’t be changed when we could just enjoy time together?

I was happy to see that despite the disease erasing him physically, he still retained what made him– him. 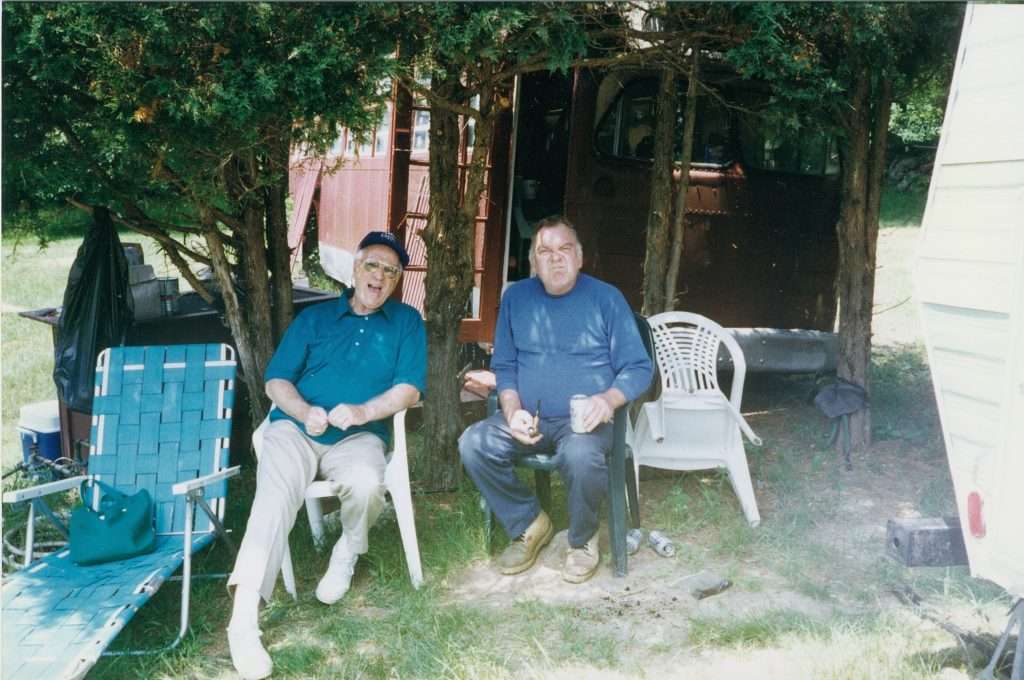 My grandfathers.  This post is about the one wearing the hat.

My other grandfather passed in 2004.

My aunt, my grandmother and I set the table.

The napkin holder had to be refilled so my grandmother had me ask my grandfather to do it.

I brought it to him along with the package of napkins, making some corny joke that he now had his orders from my grandmother.

A few minutes later, I checked in on him, and he hadn’t finished the task.  The simplest thing required so much effort, energy that he didn’t have to expend.

Soon, we were gathered around the table.

I was called upon to give the toast before the meal.

I emotionally and inarticulately threw a few lines together, focusing on the blessing that was our strong family who could get through anything.

I wish I had kept it a little lighter.  If I recall, I started off more jovial, but the magnitude of the situation got to me.

As we ate, I noticed that my grandfather nearly finished his full plate of food.  In the moment, I was encouraged because he hadn’t been able to eat much in the days leading up to the holiday.

I later found out that he forced himself to eat the food so that he could participate in the celebration and to appease us.  He knew we would be happy to see him eat.

After the holiday lunch, I stayed until he fell asleep in the mid afternoon.

On Friday, I spent the day with other family and friends.

But Saturday, Sunday and Monday, I spent sitting in my grandparent’s living room, soaking up every moment.

On Saturday, we had a pizza party.  Unfortunately, the appetite from Thanksgiving wasn’t to be repeated (and now I know why).

On Sunday, we put the football game on.  He fell asleep part way through.

The weekend felt drawn out and painfully short all at the same time.

Monday morning, I stopped by again.

My grandmother, trying to maintain some normalcy, was still leading her weekly knitting group at the town’s senior center.

Since my grandfather was weak, she didn’t like to leave him by himself.

By visiting then, I could alleviate her worry and spend some 1:1 time with him, which I hadn’t gotten a chance to yet on this trip.

We had a couple of hours to chit chat.

I didn’t say goodbye per se. I didn’t try to come up with a list of things that I had to say while I still could.

Yes, this was an incredibly sad moment.  I knew in the pit of my gut that this was it… I would not see him again.

But I could not bring myself to make this last interaction an emotional sob fest.

I did not want to talk about how much I would miss him or how I was sorry that I lived so far away.

Believe me, I had thought about it — but it didn’t feel right.

We both needed this time to be as positive as possible. Why take the limited time we had and turn it into something depressing?

Anything I would tell him was something that he already knew.

I think we both understood the situation for what it was and we just spent time together– some of it in companionable silence.

I sat and watched him rock in his rocking chair, looking at the bird feeder in his bay window. It was a classic scene– one I still expect to see when I walk into that house now, only to be disappointed a second later.

One happy moment from that Monday morning will be etched in my mind for always.  It was really quite silly.

At the bird feeder just outside, an adorable Titmouse paid visit.  At first he ate.  Then, he surprised us.

My grandparents had a garland of branches with cardinals strung on the inside of their living room bay window.

The little bird thought that the branches were on the outside, and he repeatedly tried to jump on them.  With each hop, he scraped against the glass, getting more confused.

I know it’s a bit cruel to laugh, but that little bird gave my grandfather and I a hearty chuckle.

Soon, my grandmother returned from her knitting group, and the three of us sat together for awhile.

My father arrived around lunchtime to pick me up.  I needed to head to the airport soon.

Goodbyes in our family always take forever.  There’s always one more thing to say or one more hug.  That day was no different.

When my father drove us away, I was overcome with sadness.  We talked about how good it was for me to have made the trip.  I was so glad that I did.

I got home Monday night.

Late Wednesday evening, I got a phone call from my mother.  Before I answered it, I knew.

My grandfather had been taken to the hospital a few hours earlier.

When he first got there, everyone expected him to return home.  He was supposed to have months to live from his diagnosis.

Turns out, he only had days.

His condition deteriorated quickly and, with a do not resuscitate in place, all the hospital could do was keep him comfortable.

He died that evening, with my grandmother holding his hand, and surrounded by two of his daughters and his son-in-law.  He was gone exactly one week after his cancer diagnosis.

He passed away two days after I saw him.

I was back in MA the following week for his funeral.

It was an absolute blessing to be able to afford a plane ticket home– both to make a few more memories and to say goodbye.

I didn’t have to worry about the financial aspect of the trips.  I could focus on what really mattered– being with and supporting family.

The idea of money simply being a tool to live meaningfully, to help me live my best life, was further cemented by these visits.

I had already started plotting out my path for financial independence, but my rapid debt repayment and cash accumulation was ripe to be put on hold.

Although my grandfather enjoyed a long life, his passing reminded me of how transient human existence really is.

We all have short windows of opportunity to seize what’s before us.

Our gut-based decisions are the difference between seeing a loved at a holiday dinner or seeing them at their funeral.

They are the difference between sticking with the familiar but unsatisfying or making the leap towards the unknown but promising.

Those windows open and close quickly.  Those critical moments ebb and flow with your life– and the lives of those closest to you.

I encourage you to take advantage of those once in lifetime, can’t-be-missed opportunities– even if it means delaying financial goals.

I used money earmarked for savings to fly home and see my grandfather in what would be his final days.

His passing inspired me to quit my full time job so that I could be more present in my own life.

I may not be perfect at maintaining balance, but I’ve at least made steps towards integrating all of life’s important bits.

Money is a tool to attain life satisfaction.  But, being miserable or unfulfilled in the pursuit of it seems silly, perhaps hypocritical.

We can make more money.  We can’t manufacture more time.  And it’s easier to generate income than it is to let go of regret.  Always choose the more precious commodity.

Share with us: What holiday memory is most poignant for you?  Why?